A quickie today. My brain still hurts after that last series.

Thomas Hezekiah Mix, the first big cowboy movie star back in the day, was my 8th Cousin, three times removed. Our common ancestor was another Thomas Mix, my 10th Great-grandfather, who came to Connecticut from England in 1643. His granddaughter Esther Mix married Nathaniel Hubbell, a Yale graduate (Class of 1723!!) and Presbyterian minister who left Connecticut for New Jersey. Nathaniel was the grandfather of Robert Hubbell, the one-time husband of Jenneke “Jane” Stanley.

Tom Mix married five times. His fifth wife Mabel was also a Hubbell, so it’s likely they were related. I can’t find her exact line back to the Immigrant Ancestor, Richard Hubbell – but it’s probably there.

On a 1925 United States Passport Application, he stated (under oath) that he was born in El Paso, Texas. Maybe he was working overtime to protect his cowboy image, but this was not true. He was born in Cameron County, Pennsylvania. 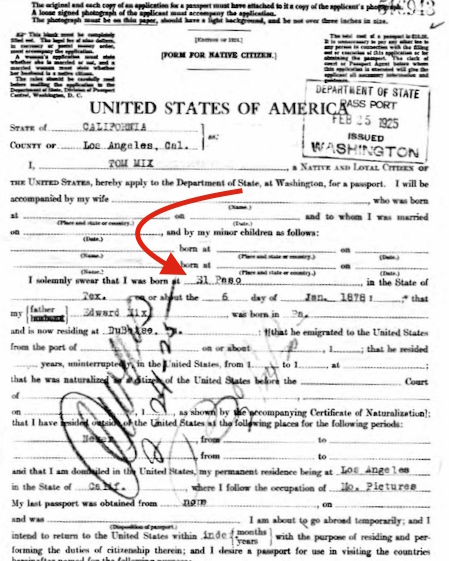 Much of his popularity had to do with the fact that he did his own stunts and riding – but he died in 1940 when he lost control of his car on a highway between Tucson and Phoenix.

Pick a card, any card! 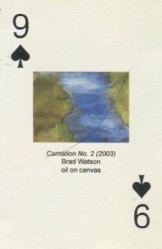 Several years back, the firm I worked for put together a little marketing/client-appreciation gift – a deck of playing cards featuring the artwork of the firm’s staff members.  A painting of mine was used on the 9 of Spades.

Researching images for this post today, I found Tom Mix… on the 9 of Spades!