Marshall Stanley (1730-1796) was a man with perhaps five kids from two wives. And he is uncanny in his ability to find cunning hideouts for ten, twenty years at a stretch. His line of Stanleys is very well documented, due to their influence and service in the earliest days of Connecticut Colony. He was named for his mother Mary Marshall’s family – so the odds of there being multiple Marshall Stanleys running around the Colonies in the 1770s are pretty steep. I assume there’s just the one.

There are various references to him in Stanley family history books, militia rolls, and Pennsylvania property documents, but none contains useable, hard-fact evidence as to his family.

The best is a baptismal record from the Walpeck Dutch Reformed Church, on the New Jersey end of the Minisink Valley – another of the affiliated churches of the region. At the bottom.

The baby’s name (center column) was Janneke – this was Jane Stanley, my 6th great-grandmother, named for her grandmother Janneke Van Keuren Westbrook. The dates work, as does the location, and even the parents’ names (left column), Marshall Stanley and Lydia Westbrook, massacred as they are. The right column names the witnesses – Lydia’s brother and, perhaps, her mother!

Then there is this other source book, “The Stanley Families of America as descended from John, Timothy, and Thomas of Hartford, Connecticut – 1636”. Such books are generally recognized as absolutely authoritative or utter rubbish, or some baffling combination of both. In this case, it’s definitely the latter. Dig this, the entry on Marshall Stanley:

Probably second child of Nathaniel and Mary (Marshall) Stanley, of Windsor, Conn., was born about 1730, and married Thamor ______. His name is on the records of Windsor, Conn., under date of July 30, 1783, as “Late of Windsor, now removed to parts unknown.” He is believed to have gone with his family before that  year to Mifflin County, Pa., on the Juniata river, where he owned an extensive tract of land. His will is on record in Wayne township of that county, dated November 17, 1796, in which his wife and children are named, and Nathaniel Stanley and Gen. John Bratton are appointed executors.

They don’t know when he was born, what his wife’s name was, where he lived, or how long he’d been there. But even with all the hedging, this is actually kind of helpful.

“Jean” was Jane/Janneke. And I think Elizabeth was the last born, not first.

Marshall Stanley was on the pay-roll of the First Regiment of Connecticut troops in 1761.

In confirmation of the opinion that Marshall Stanley was of Connecticut, Gen. D. S. Stanley says that it was always understood in the family that Nathaniel and William Stanley emigrated from Hartford. A part of the Stanley tract in Mifflin County was patented in 1766 as “Mount Pleasant,” a part also as “Stanley’s Choice.” It is inferred that he came hither or made an investment in these lands about that time.

I find it hard to believe he commuted to the property from Connecticut on a regular basis. So it’s likely (and the author seems to agree to a point) that despite what General Stanley believed, Nathaniel and William really could not have been born in Connecticut. Particularly since Marshall’s wife 1768-1771 was from a town down the road, and had likely never been to Connecticut. (And see more on General Stanley at the bottom of this post!)

Mrs. Thamor Stanley appears to have married again after her husband’s death, for Nathaniel is said to have had a half-brother, Ferdinand Vannata, who had a family of 21 children.

And that final sentence… oy!  At the very least, it does give some sort of tacit confirmation that Thamor, not Lydia, was Marshall’s wife at the time of his death. And that’s something.

The author is using a suspected half-brother relationship between Ferdinand Vanetten and Nathaniel Stanley as proof that Thamor married again after Marshall Stanley’s death. The implication being, Thamor had Ferdinand with this new husband, and consequently he was a half-sibling to her older children.

What the author doesn’t quite grasp is that at the time of Marshall Stanley’s death, Ferdinand Vanetten was already 30 years old, and Thamor Stanley was nearing sixty and not going to be bearing any more children.

It’s quite possible Nat and Ferd were half-brothers, and even that Thamor was their common mother (though I’m much less willing to concede that point). But that relationship didn’t come about after Marshall Stanley died. So that’s one issue down.

What’s fascinating – and completely frustrating – is that while we are assuming there was only one Marshall Stanley in the area at the time, I know there were a number of Lydia Westbrooks there – all cousins, and virtually indistinguishable from one another – on paper, anyway.

Ferdinand was the son of one of those other Lydia Westbrooks (probably not “mine”). What’s more, Ferdinand also married a Westbrook.

So while the Marshall Stanley bio never actually mentions the name Westbrook, that half-brother thing between Nathaniel and Ferdinand suggests that (1) people knew of some connection between them (even if they didn’t quite know what the connection was); and (2) odds are, their connection, if there was one, came from the Westbrooks.

And just because I said I would…

Jane Stanley (aka Janneke Stendly) married a man named Robert Hubbell while still in Pennsylvania. They had three daughters – Lydia, Betsey, and Sarah – then one of two things happened: either Robert died, or Jane left him and took the girls. Whatever – soon after, Jane married one Nicholas Depue and moved in the early days of the 19th Century to Trumbull County, Ohio, with Nicholas, her children and their children.

Jane’s daughter Lydia would marry Robert Earl (my 5th great-grandparents, as promised!) and the whole extended family of Earls and Depues and Houghs and Armstrongs would traipse hither and yon across the middle of the country for some 15 years – starting in Ohio, down to southern Illinois, some went into Missouri, most went back briefly back to Ohio, until most all of them finally landed in Grant County, Wisconsin in about 1852.

It’s probably worthwhile checking back with an early December entry (H. H. Earl) for a refresher on these folks.

And a final note: General D.  S. (David Sloan) Stanley (1828-1902), referred to above, received the Congressional Medal of Honor for his valor in the Civil War Battle of Franklin in 1864. He served under Gen. Sherman, and was promoted to Brigadier General in 1884. 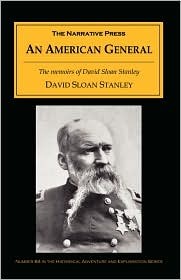 I would have done a post on Gen. Stanley earlier, but the confusion surrounding the wives of Marshall Stanley kept me from doing so. But whoever his mother was, he was Marshall Stanley’s great-grandson, and my 2nd Cousin, 6x removed. (And I’m reasonably certain he is my only relative to have been photographed by Matthew Brady.)