This will be a quick entry this week. The car needs a new battery so that it can be driven to the mechanic in the morning. When it rains…

I recently received a huge GED file containing the research of a Herr Drachsler from Germany. He did the legwork that enabled me to finally pinpoint the European origins of my paternal grandmother’s Leibel and Putzler families. They were Bohemians – not the grubby, beret-topped artist-types of bad 60s movies, but actual Bohemians from Bohemia. These families and their ancestors lived in and around the villages of Plöß (pronounced “pless”) and Wenzelsdorf for more than 300 years.

Ludwig Licha (1922-1944) was a 4th cousin of my father’s. Everything I know about him was learned day before yesterday when I discovered two photos of him on a Czech website.

Ludwig was born in Plöß in the hills that straddle the Bohemian-Bavarian border. This region was part of the Sudetenland, the portion of Bohemia settled by ethnic Germans over several centuries. After World War II, the Allies forced everyone of German blood out of Czechoslovakia for relocation in Bavaria or Austria. With cultural and familial roots running so deep in this soil, the forced departure must have been agonizing.

Once the towns were empty, tanks leveled all houses, churches, and shop buildings to ensure no one would return. Ludwig’s family home is the only useable structure still standing in Plöß. It is currently a pension, and recently hosted a gathering of former residents and their descendants. I was touched by the writer’s description of the band concert in the yard there – the first music heard in this valley in almost 70 years.

As for Ludwig, this first photo was taken probably between 1938-1940. The caption (in Google-translated Czech) described him as a member of the German athletic team, a sprinter whose personal best in the 100 meters was 10.6 seconds.

The other photo shows him in the Messerschmidt he flew in WW2, mostly over North Africa. He was shot down over Normandy in October 1944.

All politics aside, one of the biggest lessons I’ve learned from this new chapter of research is that the boys in the German armies of World War I and World War II weren’t evil creatures bent on world domination. They were boys from little villages.  I’ve honestly lost count of all my kin who went missing or were killed in Russia or Romania or France or Ukraine (or Poland or Germany or Tunisia…) during those dark, dreadful years.

On a happier note, HOW COOL is this Internet thing, anyway?

The Gasthof Flor was a hotel run, obviously, by the Flor family. My great-great-grandmother’s sister Anna married a Mr. Flor shortly before several members of their affiliated families left Bohemia for Minnesota in the 1860s.

[Edit: Actually Anna Putzler married Johann Flor after they arrived in Minnesota. But not after they’d had a child together (who sadly died on the voyage from Bremen to Baltimore). I’m kind of astonished at the frequency of illegitimate births in the old villages in Bohemia. I’m sure the women and children had to deal with some church-imposed knuckle-rapping, but there doesn’t seem to have been any sort of societal stigma attached.] 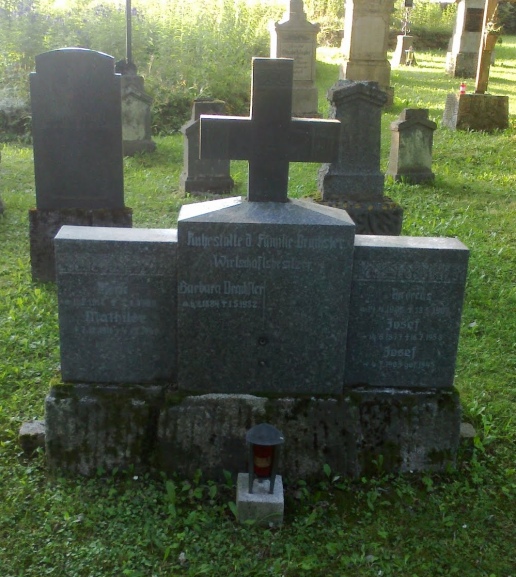 One of those photo gallery websites included this image from the cemetery in Plöß. These Drachslers are relatives of the old man who did all that Bohemian research – and the family married into my Leibl and Putzler lines several times.

And finally, a request. Next time someone goes to the cemetery in Plöß, please take a really good photo of that list of headstones (top right) for me, okay? Thanks!