Still on the subject of Montanans, I offer one Gladys Wright, Mrs. Ed Allen, from Lewistown. 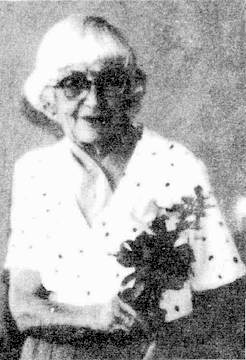 The photograph is probably from about 1980-81, as it was discovered in a town history book called “Forest Grove 1881-1981”. Gladys was born in Forest Grove, Fergus County – about 20 miles SE of Lewistown. Her parents were George F. and Ruth (Fisher) Wright. George was my grandfather’s uncle, and the first of his family to leave Iowa for Central Montana. Gladys lived a couple months past her 100th birthday, dying in August 1995. A lifelong Montanan.

Everything I know about Gladys comes from local history books to which she contributed. She wrote a biography of her father for one, and was mentioned in the Forest Grove book noted above.  This latter book also included the poem below.  I can’t find anything outwardly amazing or extraordinary about Gladys or the poem. But each seems to encapsulate all that’s great about Small Town America and the Pioneer Ethic, however many generations removed we are from the actual pioneers.

RIDE FOR A LIFE (by Unknown)

Now listen my children and you shall hear,
Of a midnight ride, and it wasn’t Revere.
But Charley, my Dad, he was sleeping a’snore
When a man came knocking on the bunk house door.
“Oh Charley,” he cried, “I’m afraid my little girl is dying.”
So out of the yard went Charley a’flying,
Astride of a favorite mount
To get the good Doctor in town’t.
Some twenty three he had to ride
The road was all rutted from side to side.

Now when only part way
He decided to save his bay.
I’m out to win this race
So he hailed the “Company Place.”
And he hitched up a couple of wild eyed steeds,
We do what we must when doing good deeds.
The hostler demurred, and stood in his way,
Now never mind that, Old George will pay.
At a sharp trot over the divide,
This had the makings of a real wild ride.
Now, it’s down hill all the way.
Charley was driving the blue and grey.
He’s going all out with a whoop and a shout,
Now let’s see those “Broom tailed nags” race all out.

Now wet and icey too,
The time is barely past two,
When Charley stabled the team, rousted out the M.D.
“Oh, Charley, could you drive for me?”
“Sure, I’d drive through Hades all night
To save that little girl for Old Man Wright.”
Now, Doc’s team was hard and fast
On a hard trip they sure could last.
Hooves shod in steel bright
They sprang off into the night.
By many a minute they shortened the trip
To the tune of the buggy whip.
And so the good Doc arrived in time
To lengthen that little girl’s time.