It’s been awhile since I broached the Eggleston DNA subject, but it’s rarely out of my thoughts for long. The problem is, my intellectual grasp on the topic is so tenuous that I avoid trying to discuss or explain it at all. The science of matching individuals through DNA is all about probability and odds – stuff that makes my fact-hungry brain hurt. But this week’s news is really cool, so I’ll try.

So I went the scientific route. I submitted a DNA sample to one of those companies (there were fewer then), and the analysis began. Several levels of analysis. And while matches to the information on my X-chromosome starting piling up – hundreds and hundreds, and I don’t think I’ve established one clear connection out of them – the Y-chromosome matches, all those Watsons I hoped to discover, were nil.

I’m not sure how it happened – I think one of the surname project administrators had occasion to see my results and recognized a pattern. He ordered an additional test or two, and there it was – a series of close matches to a handful of men, most named Eggleston. We can easily count the original Eggleston immigrant as a common ancestor (and he is), but in he’s not necessarily the most recent. My results put me in a tiny sub-set of Egglestons, pointing to a common ancestor a little closer in time – a grandson, perhaps, of the original: Joseph Eggleston (or Eccleston), c. 1685-1767, of Stonington, Connecticut.

While all this was going on, I contacted a woman whose name is Watson, whose Ancestry tree contained a lot of Watsonian coincidences with mine. Common locations, common first names through the generations, and a very familiar looking brick wall surrounding Halfmoon, New York, circa 1800.

Loooong story short, she convinced a male Watson cousin to do the DNA test (since all this action is Y-chromosome action, only men can take part), and the first level of test results came in yesterday. I am closely related to this cousin of hers. What’s more, our respective Brick-Wall Watsons are also very closely related – likely brothers. So we now have another Watson line that definitely connects back, at least genetically, to the Connecticut Egglestons. The next levels of tests will determine whether our ultra-exclusive Eggleston club has a new member – but I suspect that’s pretty much a given at this point. 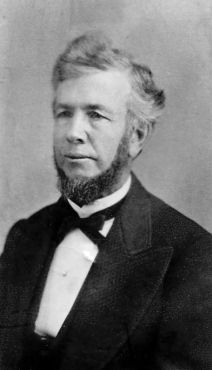 So my Watson correspondent is now a virtual bona fide Watson cousin – a 6th cousin, most likely. Her Brick-Wall Watson was named Elisha Watson (c. 1794-1841) – and he was the first Elisha Watson I ran across when I began researching my 3rd great-grandfather, also named Elisha Watson (1822-1879), the gent in the photograph at left. But her Elisha was in the wrong part of New York State (Wayne County, rather than Saratoga), so I made a minor note of it and pressed on, never really imagining that we’d all circle back to him years later.

Of course, being the person I am, I’m very interested in the real-life applications of this knowledge: if the face in the photograph reflects identifiable Eggleston characteristics… if that bum-ticker trait in our Watson line also afflicted generations of Egglestons. That sort of thing.

This isn’t much of a breakthrough in terms of hard facts – but after 24 years of chipping away at it, I like to think that brick wall is showing some wear and tear.