Hiatus over, I guess.

And while this post concerns a big breakthrough I had, it also concerns how it came about – a method of research that I think does not get its due respect.

It may seem counter-intuitive to try a simple, basic Internet search after coming up empty in all those snazzy regionally- or culturally-specific databases on Ancestry or FamilySearch. But I’m here to tell you, it’s always worth a try.

I recently reacquainted with my 4th great-grandparents Stephan & Elisabetha (Hirsch) Leibl, married in Plöß, in Western Bohemia, in 1783. (Earlier posts here and here.)  It struck me that with everything I know about the Leibls, I’d never moved beyond Elisabetha in her family line – perhaps I’d never even tried!

So I tried. I dove into the Bohemian church record indexes for mentions of her before and after her marriage, and was tickled to find a birth/baptismal record for one of her children that identified Elisabetha as the daughter of Georg Hirsch and his wife, Walpurga. So – great! – I’d moved back another generation! High Five!

Now here’s the search engine pitch: Use them. Use them early and use them often. Use them even before you think you have enough information to justify a search. Use them after you’ve exhausted everything else!

So I opened Google, typed Elisabetha’s surname “hirsch” and her hometown “johanneshutte”, and hit Enter. That’s it. Honest!

There were many hits – but one grabbed me right away: an article called Die Glasmacherfamilie Hirsch in der Lausitzer Glashütte Friedrichsthal, by Dietrich Mauerhoff, from the November 2009 issue of Pressglas-Korrespondenz. http://www.pressglas-korrespondenz.de/aktuelles/pdf/pk-2010-1w-mauerhoff-friedrichsthal-hirsch.pdf (accessed 12 Feb 2016).

I had enough German, even decades ago, to glean some key concepts from the title.

I didn’t know exactly where Lausitz and Friedrichsthal were, but they’re German, so I was in the right neighborhood. So armed with a German translation app, I checked out the full article. Five pages of remarkable information.

The opening paragraph mentions Joseph Hirsch who lived in Straßhütte (Bohemia – very, very close to Plöß) between 1779 and 1787 with his wife Anna. The rest of the piece traces his ancestors, brothers, and descendants over a couple of centuries in many of the the most noted Bohemian and German glassmaking centers.

As is so often the case, the key piece to my puzzle was one I’d already looked at several times – just not carefully enough. It was that baptismal record from which I pulled Elisabetha’s parents’ names. My 3rd great-grandfather Joseph Leibl’s record, in fact.

This entry records a baptism – reading from left to right, it was performed on 28 December 1805 in House No. 3 in the village of Wenzelsdorf (literally next-door to Plöß). The child was Joseph Leibl; Catholic, male, and legitimate. Under the big heading “Aeltern”, the father’s name is Stephan Leibl, a shoemaker and (I think) a judge of some sort; the mother is Elisabetha, as reported above, the daughter of Georg Hirsch, a glassmaker from Johanneshütte, and his wife Walpurga.

The next field – the one I ignored before – gives the name of the child’s “godfather”: Joseph Hirsch, a glassmaker from the Schönbacher hütte in Germany, in/near the Thüringia forest.

As a result, and thanks to Herr Mauerhoff and Google, my Hirsch lineage – a name I had barely acknowledged a day earlier – had been documented back to 1625! 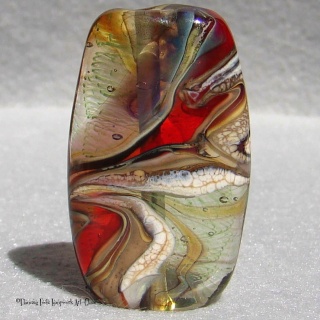 Postlude: When I met my husband almost 8 years ago, I was so fascinated by his hobby – making lampwork glass beads – that I took it up myself. I’d never worked with glass before; never really considered it. But clearly some chunk of my Hirsch DNA kicked in when I did. I fell in love with the whole process, and I’ve been glassy-eyed ever since. Spooky, almost.