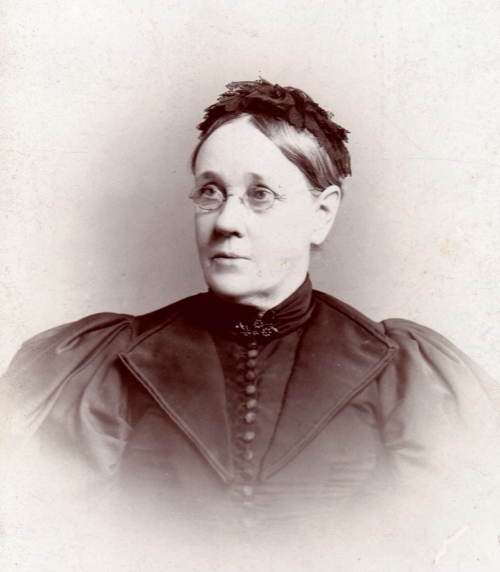 Sarah Hassell moved from Birmingham, England to New York City in 1832 at the tender age of two.  I don’t know the circumstances of the family’s emigration – they had some seriously deep roots in Birmingham. But they left, and made a very good go of it in the Colonies.

Sarah’s father John was a doctor – of sorts. And he was a minister – of sorts. I’m not sure when it happened, or how, but he was a wealthy man who owned a bunch of Manhattan properties worth bazillions today.

Yep, my Hassell ancestors were stinkin’ rich.  Bankers and dentists. ACRES of dentists! There was even one family – Sarah’s brother Samuel’s in-laws – that included one of those fabulous Gilded-Age bachelors, a Broadway first-nighter who lived at Delmonico’s. Literally – in the residence hotel upstairs. When he died, he was worth a cool $1.7 Million in 1910 dollars. Adjusted for inflation, that little nest egg would be worth $42.5 Million today.

Given all this, I have a sense that Sarah and the kids weren’t left to freeze after her husband Joseph died of consumption at age 45 in 1869. The family lived in Chelsea, in the low West 20s. Probably not a particularly fashionable address, but serviceable. Sarah is listed in Census records as a dressmaker. They still lived there when my great-great-grandfather T. S. Watson appeared on the scene. He and Josephine are shown living with Sarah at 190 Ninth Avenue in the 1875 State Census.

At some point in the late ’80s, Sarah moved out to Brooklyn with her two youngest children. She owned her house at 1387 Pacific Street, not far from Prospect Park.

A wonderfully ridiculous article was published in 1894 in the Brooklyn Eagle describing a reception for Sarah’s son and new daughter-in-law. A somewhat less than lavish description of the lavish decor followed by the names of absolutely everyone who attended. Included are my great-great-grandparents (Rev. and Mrs. T. S. Watson), the groom’s Wood relatives from Staten Island, the bride’s Wood relatives from up the Hudson, hundreds of dentists, and – my favorite brush with fictional semi-celebrity – Mrs. Strakosch!!! (Apologies to the non-musical theater buffs reading this. Trust me, it’s a scream!)

There is a story handed down by two of Sarah’s nieces that she never set foot out of the house without her jewelry in her purse. She considered it safer with her, an elderly woman on the streets of Brooklyn, than locked up in her home.

Sarah’s will contained lots of interesting details. For one, she created a trust to ensure the well-being of her son Joseph’s children, since Joseph himself had abandoned his family. She all but cut him out of the will entirely. In the Thirteenth bequest, his share of the property in question is less than half of the share given each of his sisters. 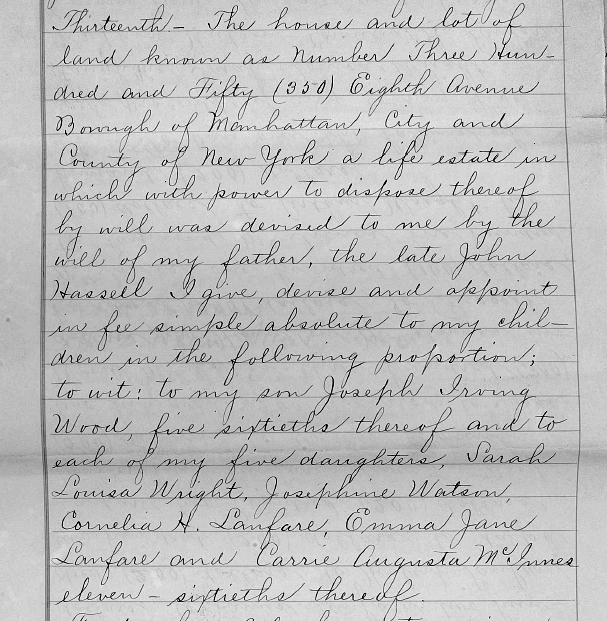 But oh, that property!  “… devised to me by the will of my father…”  John had five children still alive at the time of his death. Sarah was the youngest – and a girl, to boot – but his holdings were vast enough that he could leave her this!

350 Eighth Avenue, as such, doesn’t exist today – but it must have been worth a fortune when it was sold. This is Eighth Avenue & West 28th Street. Number 350 would have sat on the far right-hand corner of this intersection, in the red-brick apartment block with all the trees in front. Across from the Fashion Institute of Technology (FIT). My great-great-grandmother, wife of a Nebraska preacher, had an 18% stake in it!

And finally, to bring it all back home, Bequest No. 3:

The low rocking chair – known in the family as The Green Chair, currently in the home of my Aunt. (And yes, I know it’s red.)