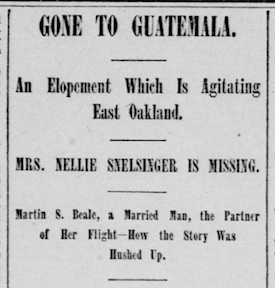 Juicy stuff, huh?  I’ve been hesitant to open this can of worms – simply because it’s nearly impossible to tell this story cleanly, steering clear of any of the countless snarls and snags. But I’m determined – and rest assured, there are several more posts in the works concerning this family.

Nellie is my 1st cousin, four times removed. Her father was a younger brother of my 3rd Great-Grandfather, Rev. Elisha Watson.

The headline above was attached to a front-page story chock-full of reproach and judgment, as only late-era Victorians could fling it. She was labeled “wicked”, a wayward girl whose first marriage (to Mr. St. John) ended in scandal and divorce. That marriage, in fact, took place shortly after she had been fetched back by her father during an unsuccessful elopement attempt with an unidentified married man. Now in Summer 1892, some eight years after the divorce (seven of which were as the wife of Mr. Snetsinger), the former wickedness was reportedly forgotten and (my favorite quote) “she was once more received by everyone.” [Note: The article misspells Snetsinger as SneLsinger consistently throughout. Go figure.]

But recently there had been new rumors – carriage rides, covert dinners, and the like – involving Nellie and yet another married man. And if the town’s tongues weren’t yet waggin’, they were about to start!

It seems that on June 3rd, Nellie went to the Alameda County Recorder’s Office with the deed to a piece of property left her by her father. Without her husband’s knowledge, she sold the property to a deputy recorder for perhaps as much as $2500, and arranged somehow to keep the transaction from being published in local newspapers.

On June 5th, Martin Beale announced to his wife that he was leaving for South America, and that he would send for her and the children when he was settled. He said it was useless to come down to the dock to see him off, so he said his goodbyes at the front door.

But Martin didn’t leave on the 5th – he met up with Nellie, and her money, and they spent the night together in San Francisco. Then, assuming the name Brown, they boarded the steamship San Juan headed for Guatemala.

The families caught on to the situation in fairly short order and a cover story was devised – to wit: Nellie hadn’t absconded – she was in Canada visiting her husband’s relatives, she was fine and writing letters home on a daily basis, and she would be home in a few weeks. Scandal averted. For a time.

But when authorities began looking for Martin Beale, crew members of the San Juan, now returned to San Francisco, recognized the descriptions of him, and of his companion. And the press was hot on the scent. A second squib appeared some weeks later announcing that Nellie had been located in Guatemala with Beale, who was running a saloon. But that was pretty much it.

Then a third article ran on October 8th, reporting Nellie had returned to her mother in Oakland. A neat summing up:

Mrs. Watson, a pleasant-faced lady with gray hair, stated to a CALL reporter last evening that her daughter was too prostrated to talk. It was the mother who induced her to come home, leaving Beel [sic] behind. He is running a saloon in Guatemala and whatever infatuation Mrs. St. John [sic] ever had for him is now a thing of the past.

“My daughter has been delicate all her life,” said Mrs. Watson, “and she fell a ready victim to Beel’s evil influence because of her weakness.

“She is here with me, her sisters and brother and among her friends, who will protect her in the future. I have always kept a watchful care over her child [yes, there was a child!] and it will be returned to her.

“The story that Beel forsook her is not true. It is owing to my influence that she abandoned him and returned home.”

Stay tuned for the next thrilling episode!!