Addendum to Ancestor No. 12

I can’t post that car photo and not discuss the YEARS of wheel-spinning that went into identifying who’s who.

There were those I recognized right off the bat. But there are some obvious interlopers too.  Neighbors? Family? I didn’t know.

I know what Carrie and John looked like, so the other two adults (dark-haired man in front, dark-haired woman in back) were mysteries.  Also there are too many boys. The girls add up, but with only four boys in the Leibel family, two in the photo are mysteries – but which two??

Then there was the matter of the toddler, who is actually the key to dating the photograph. Carrie & John had a daughter, Audrey, in July 1910. If that child were Audrey, the year would be about 1911.

But honestly, I’d always assumed the year was 1914, and consequently that the toddler is Walt.  If there were only two options, based on the fact of a toddler in the family, any toddler, in this general time period, my vote always went with 1914. My reasoning was simple: In 1911, my grandmother would have turned six in October.  In 1914, she was not quite nine. In this photo, she’s much closer to nine than six.

This went on for years. Twenty, easily. I have a framed copy of the photo on my wall here in my office, and would glance up now and then, scratch my head for awhile, then go back to whatever I’d been doing before.

Finally, my persistence/obsession paid off. I tracked down one of my dad’s Minnesota cousins, and he had his daughter contact me. We began a correspondence. She offered to run the photo past her father and aunt to see if they could help me out. And they did.

Out of 14 possible points, I scored a respectable 10. The two mystery adults were identified as “Uncle Bob” and “Aunt Ann”.  Uncle Bob was Robert Coleman, who was married to Carrie’s sister Mary. Mary died in 1911, and Ann (Morrin) was his second wife.  For years, I’ve had a photo of Uncle Bob as a boy, but never imagined he became the big guy in the vest!

The boy in back, in the dark jacket, goes with Aunt Ann somehow. A little brother, maybe? [YES! Thomas Morrin!]

The major ringer, though, was the little kid in the backseat. That’s Kenny Coleman, the second of Bob and Mary’s three kids. The exact reverse of his father, I had a photo of him as an adult, and never imagined the kid was him! 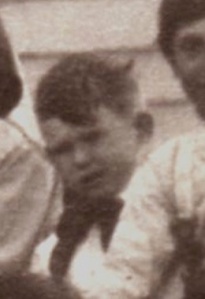 So, from front to back, left to right: