If you’re at all like me, you have this one shirt-tail relative who is so well-connected that you go far deeper into their life and history than you ordinarily would with just some random “by marriage” relation.

Nina Mauvais Watson (1871-1951) married Frank Carpentier Watson, a first cousin of my great-great grandfather’s, a cousin from the Western branch of the family.  Nina was the daughter of Zeno Mauvais, the owner of a large music store in Oakland and later San Francisco, and Mae Eames, whose family arrived in the Bay Area from Maine in 1862.

Frank was a young guy just starting out in the real estate development business when they married in September 1891. Over the years, they were regularly mentioned in the society columns for one thing or another: Nina, the consummate hostess; Frank, the strappingly handsome junior tycoon; and the family, semi-regular victims of food poisoning.

I ran into a squib in the Trib (Oakland Tribune), May 17, 1908):  “Mrs. Frank C. Watson has been entertaining her relative Captain Henry McCrae, one of the popular officers of the fleet, at her home in Van Buren avenue.”   I was curious how they were related, since I hadn’t run into the McCrae name yet, so I dug. Turns out, Henry’s brother John married Nina’s Aunt Annie. (Annie was Mae’s sister.) And their name was actually spelled McCrEA. Henry was part of the “Great White Fleet”, a group of Navy battleships that in 1908 was in the process of a round-the-world sailing ordered by President Teddy Roosevelt. And Henry was a war hero as well, having made quite a success in the Spanish-American War.

Henry had an uncle James McCrea, from the Philadelphia branch of the family. James Jr., Henry’s cousin, was President of the Pennsylvania Railroad in the 1910s.

Keeping with the Hollywood theme, Frank and Nina’s son Donald was a student at the University of California in Berkeley, where he met up with the brother of film star Ramon Novarro. The two families became very close, and there are a number of newspaper items discussing their various visits.

Son Donald and Sally Prather had a big wedding in 1930 – a society-page meltdown. In 1939, all Piedmont went berserk with the news of a double-divorce drama precipitated by the affair between community pillars Sally Prather Watson and George Tyson Weihe. Sally and George eventually married and remained together until his death in 1956.  Sally married again, in the 1960s. Her third husband was Leif Henie, brother of film and skating star Sonja Henie.  (I know!)

The capper comes via Nina’s uncle (Mae’s brother) Roscoe Eames and his wife Netta. Roscoe was known for a shorthand-ish speed-writing technique he’d developed, and for The Overland Monthly, a literary journal he and Netta edited. They were also free-loving, socialist nutbars – the sort of folks who made Berkeley Berkeley.

Netta’s sister and brother-in-law both died young, and it was decided that their 15-year old daughter Charmian Kittredge would come live with Aunt Netta and Uncle Roscoe.  She was very bright, quickly perfecting Roscoe’s speed-writing technique, and helping out with the Monthly while she finished school.  She accompanied Roscoe and Netta to their initial meeting with a young writer whose work they’d seen and liked. Thus Charmian met her future husband Jack London, who was enthusiastically welcomed into their bizarre little universe.

Netta definitely loomed large in Jack London’s life, but Uncle Roscoe was quite a piece of work himself. He managed to be named navigator of The Snark for London’s famous voyage, only to be reassigned a few days into the excursion, when everyone discovered that Roscoe knew nothing about navigation. 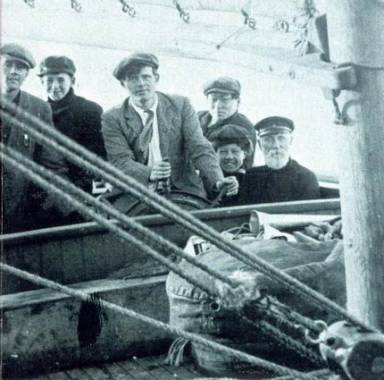 (The Crew of The Snark. London, center, Charmian, and Roscoe at far right.)

Roscoe and Netta finally divorced when she announced she would like to marry the man with whom they’d been living for a few years. A clergyman.  So Roscoe found a sweet woman from Fresno, and they were married the instant his divorced was finalized, Jan. 22, 1910.

And then there’s the… no, that’s definitely another story.

Leave a Reply to All the Fabiola Ladies – Montanatude Cancel reply