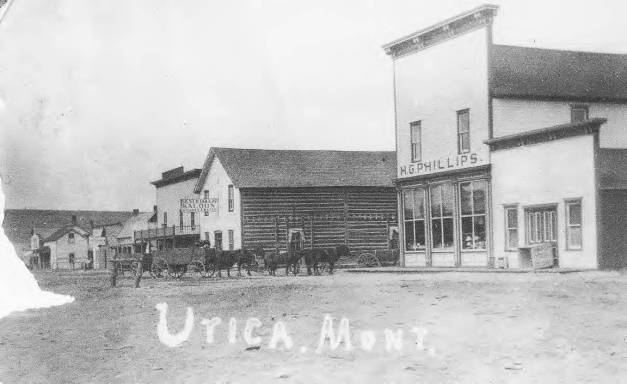 My great-grandparents Lewis L. and Eva (Davis) Wright left Madison County, Iowa sometime between January 1892 and May 1893, when their first child was born in a town called Utica in the Judith Basin region of Central Montana. Lew had nine siblings and half-siblings who survived to adulthood. Of the nine, seven of them lived at one time or another in Utica.  His brother George was first, leaving home at sixteen (so his bios say), circa 1882, to work the ranches and saloons of the Judith Basin. One of his co-carousers was one Charlie Russell, the not-yet acclaimed painter. George became a very well-known sheep rancher and later was elected to a County Commissioner seat in Fergus County.

By 1908, Lewis and Eva had added three daughters and one more son to their family and had a third son on the way. I think Lew must have fallen on some hard times – I know he had a ranch for a time, but he ended up spending most of his Montana days as a miner. And I suspect Eva, pregnant again at 42 years old, didn’t think a mining camp the best place to be. But that’s pure conjecture.

What is true is that she and the children left Montana to live down near her brothers in NE Nebraska, and that she didn’t return until after 1920. By then: Jack (eldest son) had long since returned to Butte and was married, had two sons, and worked in the mines; daughters Lillian and Opal had married Nebraska fellas and were starting families down there; and the three youngest – Ed, Eve and Louie (my grandfather) – lived with their parents in a town called White Sulphur Springs, located on the other side of the Little Belt Mountains from Utica. What’s odd is that during the time Eva and the family were in Nebraska, Lew vanished from sight. No census reports, no newspaper articles, nothing.

Louie met my grandmother in White Sulphur Springs, and that’s where my mom was born.  But that’s another story.